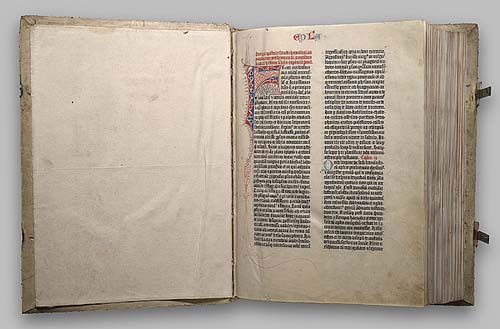 When people think about the printing revolution, one name comes to mind: Johannes Gutenberg.

But what if Gutenberg didn’t actually invent the revolutionary technique of mass-producing words as we know it today?

Scholars will soon get a chance to examine in exquisite detail what is considered the first book printed with moveable type.

A project is currently underway at the Library of Congress to digitize its copy of the Gutenberg Bible. The library has partnered with Octavo to photograph, scan and digitize every binding, endsheet and page of the three-volume Bible.

“We’re hoping to take digital technology as far as it goes and bring this book to life,” Elaine Ginger, editorial director of Octavo, said. “We hope to make this book more accessible than even Gutenberg did.”

“Using contemporary technologies to preserve and capture the images has an importance for preservation, the historical record, and the symbolic meaning of what is taking place in electronic communication technologies,” agreed Czeslaw “Chet” Jan Grycz, CEO of Octavo.

The Gutenberg Bible “represents the first adaptation of moveable mechanical processes for print reproduction, and it represents a phase of human communication,” Grycz said.

The Library of Congress’ early 16th-century copy is just one of three perfect examples printed on vellum that are known today. The British Library in London and the Bibliothèque Nationale in France have the other two perfect copies.

Few can access these copies, which are kept under lock and key in temperature-controlled storage vaults where even imaging specialists aren’t allowed to turn the pages.

But digitization projects have opened up these rare texts to the public. The British Library’s Gutenberg Bible drew 1 million hits in its first six months.

Now, Octavo will post pages of the Library of Congress’ copy of the Gutenberg Bible as it is being imaged on its website beginning March 5.

Digital cameras will capture every original detail, from typography to paper surface. Octavo’s technicians will use cool, low intensity, full-spectrum lights and custom cradles to protect the book’s bindings and text while photographing each page.

As the images are captured, they are automatically transported to an online storage system, so users can see the progress of digitization in real time. Real-time commentary and translation from Latin to English will accompany the job as it is being imaged. So users will be able to click on the word “Genesis” and be taken directly to that section of the Bible.

Since each captured image is 757 MB of data, the entire book will total nearly one-half terabyte. The entire process should take about six weeks.

The result will be the most faithful, color-accurate, and detailed digital record possible, Octavo’s directors claim.

A CD-ROM of the Gutenberg Bible will likely be available for purchase through Octavo’s website in June, Grycz said.

Digitization has already allowed scholars to question Gutenberg’s work. Last year, a pair of scholars used digital imaging and computer analysis to come up with their own conclusions about Gutenberg’s method.

They concluded that Gutenberg did invent moveable type, but his method of creating or casting each letter differs from what is conventionally thought of as the method of mass production. Instead of using a punch and matrix, Gutenberg may have used an earlier technology, casting letters in molds of sand.

Needham said a printing revolution might have occurred 20 years after Gutenberg is credited with inventing moveable type.

“We don’t know if the study of high-resolution images will shed any light on which way (Gutenberg) may have printed the edition, but the images will certainly be used to try to make such determinations,” Grycz said.

Other libraries are using digital technologies to revitalize research into rare books.

The British Library recently announced that it will digitize the first edition of Geoffrey Chaucer’s Canterbury Tales. The library will post 1,300 high-resolution images of the 15th-century work online.

Such digital editions allow scholars to reexamine rare books in a way that rivals handling the print editions.

Rather than having to examine the text within the confines of library walls, “scholars will be able to (do research) essentially over the Web,” Ginger said.

“Technology is interesting, but we are really about facilitating the transformation of scholarship and access to rare and primary resource materials,” Grycz agreed.

Out of Print, But Into Digital

Digitizing Archives Not So Easy